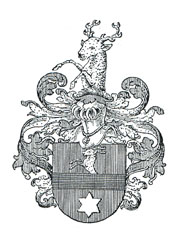 The name Röntgen occurs regularly in the part of Germany which is called Rheinland, the region around Cologne and Düsseldorf. The small town of Lennep, about fifty kilometres East of Düsseldorf and positioned in a valley of the Bergische Land, houses the Deutsches Röntgen Museum.

The museum is dedicated to the individual who discovered the rays which were named after him, Wilhelm Conrad Röntgen. The archives of the museum accommodate a wealth of information, among which a relatively complete family tree of all family members of the discoverer. Visiting Lennep is certainly worthwhile, the town survived the Second World War practically without a scratch and there are still many buildings in the original architectural style of the ‘Bergische Rokoko’.

Initially this branch of the Röntgen family hails from the hamlet of Rölscheid in the parish of Dabringhausen, approximately forty kilometres northeast of Cologne. It is unclear how the oldest well-known ancestor of the Röntgens, the farmer Martin Röngen (sic), ended up there during the turbulent times of the Thirty Years War. It is likely that his move was connected with the fact that the ruler of the Bergische Land supported Martin Luther’s Protestantism. Apart from his work Martin Röngen occupied himself with the cottage industry of weaving at his farm. Lennep, like Rölscheid, is an idyllic spot in the valley of the mountain stream the Linnefe, worth a visit. The old derelict farm which remains there, in the familiar timber framing style of the Bergische Land, was once probably the property of Martin Röngen. 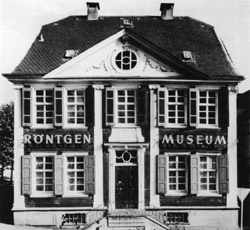 Martin Röngen’s grandson, Matthias Röntgen, became a cloth manufacturer in Lennep. His son Johann Heinrich succeeded him as a cloth manufacturer, but also owned a coppersmithy and was the pastor in the ‘Evangelische Kirche’ of Lennep. Johann Heinrichs first son, who was also called Johann Heinrich, was the grandfather of Wilhelm Conrad Röntgen, the discoverer of the X-rays. His second son, Peter Matthias, became a salesman and a copper smith. Several of his ten children emigrated to the United States. One son, Johann Engelbert, became a liqueur distiller in Deventer and married the Dutch Carolina Huyser there. All that is known of her is that her father was a master tailor. Johann Engelbert is said to have had quite an ear for music. 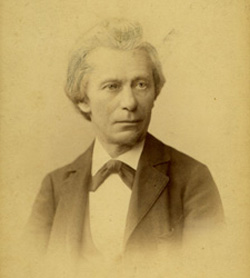 Their son, Johann Matthias Engelbert, born on 30 September 1829 in Deventer, was musical to such an extent that as a nineteen year old, he travelled to Leipzig to study with the violinist Ferdinand David at the conservatory Mendelssohn founded there. Apart from being the leader of the famous Gewandhausorchester Engelbert became a teacher at the conservatory he once himself attended. In 1854 he married Pauline Klengel, daughter of Generalmusikdirektor Moritz Gotthold Klengel, in Leipzig. The son of Engelbert Röntgen and Pauline Klengel was Julius Engelbert Röntgen, born on 9 May 1855 in Leipzig. It soon became apparent that Julius was highly gifted musically. Pauline Klengel, an excellent pianist herself, had an extremely talented brother, Julius, a doctor of the classical arts and a composer too, of numerous unpublished works for chamber music. He took care of Julius’ musical upbringing. The family lived at the Lehmannsgarten, west of the famous Thomaskirche, until its demolition in 1899. The family Klengel also lived at Lehmannsgarten, as did several other famous musicians, among whom the aforementioned Ferdinand David, the Thomascantor Ernst Richter and, in bygone days, Felix Mendelssohn Bartholdy too. Julius had two sisters, Johanna Carolina and Carolina Elisabeth, both of whom were also reasonably musical. Barely 22 and just graduated, through an old contact of his father, professor A.D. Loman, Julius was offered a job as a piano teacher at the music school in Amsterdam. During his studies in Leipzig, Julius had met his future wife Amanda Maier whom he married in 1880 in Landskrona in Sweden. She too, hailed from a musical family. Her father, like herself, was a violinist. They had two sons: Julius, who would later become head teacher of the violin at the Amsterdam Conservatory, and Engelbert, who made a name for himself in the United States as the solo cellist of the orchestra at the Metropolitan Opera in New York and as a member of the American Woodstock String Quartet. Amanda died in 1894 in Amsterdam. In 1897 Julius remarried Abrahamina des Amorie van der Hoeven (1870-1940). She was a daughter of Jan des Amorie van der Hoeven, representative for the Nederlandsche Handelmaatschappij (Dutch Trading Company). Julius met her when she was a student at the Amsterdam Conservatory. They had four sons, three of whom would also become musicians. Johannes became a pianist and composer, Edvard Frants second solo cellist at the Residentie Orkest (The Residence Orchestra or the The Hague Philharmonic), Frants Edvard an architect and amateur flautist and finally Joachim violinist and headteacher at the Royal Conservatory in The Hague. Their daughter Amanda (1899-1904) died when she was four years old. Of Röntgen’s grandchildren only Anne Marie (born 1923), daughter of Johannes, and Jurriaan, son of the architect (born 1945) still practise music professionally. 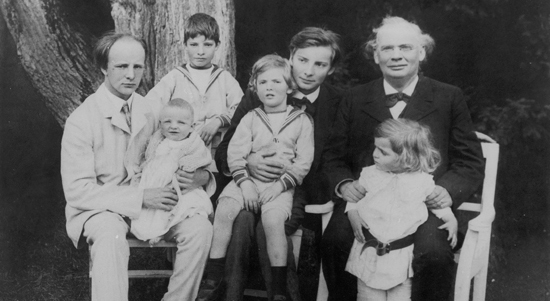 Julius Röntgen with his 6 sons