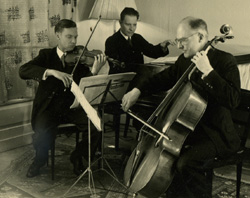 In 1900 Abrahamine and Julius rejoiced at the birth of a daughter, Amanda, named after Julius’ first wife. Sadly, she died from pneumonia at the age of four. It was whispered in the Röntgen household that Amanda too, would have been highly gifted musically. On 12 June 1902 Edvard Frants Röntgen was born, named after the Norwegian composer Edvard Grieg. He too appeared to be extremely gifted musically. After his years at the Gymnasium he went to the Amsterdam Conservatory and received cello lessons there from Isaac Mossel. At the beginning of 1924 he graduated from the Conservatory with honours. At the Conservatory he was committee member of the Society of Conservatory Students.

Through a friend of his father, the composer and conductor Peter van Anrooy, Edvard was given the opportunity to become a member of the Residentie Orkest directly after his graduation. After Julius Röntgen died he took care that his musical inheritance would not be overlooked in the large music collection in the Gemeente Museum Den Haag. It would become one of the largest archives of a composer within this large music library, which, after some wandering through the town finally settled in the newly founded Nederlands Muziek Instituut. During his work with the Residentie Orkest he kept working at a possible solo career. In 1935 he married Freda Mieke Bertha Cheriex and during his honeymoon to Barcelona took several private tuitions with cellist Pablo Casals, whom he had met during his visit to Bilthoven. Together with a few colleagues from the orchestra such as Willem Brederode (who would later become the manager) he was active with the Hollandsch String Quartet. Together with viola da gamba player Carel van Leeuwen Boomkamp he would play the gamba obligati in the St. Matthew and the St. John’s Passion for many years. For the Residentie Orkest he was also active as a writer of numerous programme notes to accompany the concerts. He concluded his career as second solo cellist next to Martin Zagwijn.

In the Second World War playing in the orchestra became increasingly difficult. The orchestra refused en bloc to become a member of the Kulturkammer and had to perform for free for the soldiers of the Occupier. After the war, from 1949 onwards, Willem van Otterloo became the orchestra’s conductor. Van Otterloo, who used to be a cellist in the Utrecht Symphony Orchestra, would take the Residentie Orkest to international heights, a reason for Edvard to stay in The Hague. He remained active as a chamber music player, often together with his brothers Joachim and Johannes in the new, second Röntgen Trio. He was secretary of the Board of the The Hague Music Library for years. After the merger with the Public Library he remained a board member for this establishment. The orchestra trip to the United States was one of the highlights of his career. The last years of his working life were difficult for him. The irregular working hours and demanding conductors every now and then took their toll. In November 1964 he suffered a heart attack, which put him out of circulation for six months. During a gathering in one of the foyers of the Kurhaus Edvard Röntgen and Martin Zagwijn were bid farewell. It was a milestone which had been reached laboriously. In April 1969 he had lost his brother Johannes, with whom he enjoyed making music so much. During a deeply moving get-together Edvard and Joachim said a musical goodbye to their much beloved brother. Edvard was not able to enjoy his retirement long. He died on 14 September 1969 in Merano in South Tyrol.