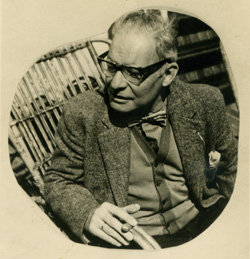 From 1918 onwards Johannes Röntgen would perform frequently as a concert pianist and accompanist of famous musicians, such as for instance Pablo Casals. In 1920, after the conservatory he was given the chance to travel through the Dutch East Indies for one year and to give concerts everywhere he visited together with the singer Hovid Kraus-Adama. He wanted to become a conductor and 1921 went to Edinburgh for one year to be given conducting lessons by Donald Tovey. In the meantime he had become engaged to the singer Julia Fentener van Vlissingen and they were married on 6 July 1922.

During that time his father got a letter from Oscar Posa, conductor in Aussig (then: Germany, now: Üsti-nad-Labem, Czech Republic). Posa needed an assistant for the local Opera. After much pondering Johannes and his wife decided to go to Aussig. From 1922 to 1924 he was Kapellmeister of the City Opera in Aussig. On 29 October 1923 their first daughter Anne-Marie was born.

In 1924 they returned to Holland and settled in Baarn, where he became a music teacher at the Baarnsch Lyceum. Later he was offered jobs with various Toonkunst departments (of the Society for Advancement of Music) in Zeist, Alkmaar and Amsterdam and others. Because travelling to all these different workplaces took up so much time, the family moved to Amsterdam in 1928.

There he also set to work as a pianist, teacher and composer. In addition, he also accompanied his wife on various national and international tours. On 25 February 1931 their second daughter was born and their family was complete.

Johannes stayed on as choirmaster of the various Toonkunst departments until 1940. During the war he renounced this position and retired from public life as he did not want to become a member of the so-called ‘Kulturkammer’. He did become vocal coach at the Cornelis Vrij School, where he put together several musical plays for the pupils of the school together with teacher Tom Bouws. As the pièce de résistance they created the chamber opera “Joffer Marianne”, for vocal quartet, performed by his wife Julia Röntgen, Wiebe Draaijer, Diete Blooker and Max Wulff. Together with his brothers Edvard (cellist) and Joachim (violinist) they founded the Röntgen Trio and organized ‘illegal’ house concerts in exchange for food during the famine winter.

Apart from Sunday morning services he performed for audiences with the choir regularly. The highlight of the year was the performance of the St. John’s Passion, on Good Friday.

In January 1962 his wife Julia died and six months later he remarried Gerda James-Cheriex. After his retirement he held onto his function as artistic director of the Amsterdam Vocal Quartet and continued playing music together with his brothers Edvard and Joachim.

On April 21, 1969, en route to Italy, Johannes and Gerda were involved in a car accident in Namur (Belgium). Gerda died immediately after the crash and Johannes a week later, on April 28, 1969.

The compositions are stored in the Röntgen Archive of the Nederlands Muziek Instituut in The Hague.