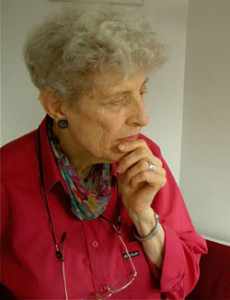 Because my parents and I only came to live in Amsterdam in 1928, I treasure a few memories from the time that I stayed in Bilthoven. My grandfather posessed a cozy, warm personality, always there, full of music, always humming. He usually went his own way. As we walked on the heather, opposite the house, he walked alone, ahead of us, or behind us, and I by the hand of my grandmother. I was always “dropped” there in Bilthoven at “Gaudeamus” when my parents were on concert tour. We also stayed there during the holidays, all together. When I was playing on the lawn in the back of the garden, I watched my grandparents or other family members sitting on the terrace. Reportedly, I ran there, and always sat on the lap of my grandfather. At dinner, together with the whole family, including uncle Frants and uncle Edvard, the two unmarried brothers of my father, everyone was often humming. Then my grandfather used to say: “Nicht singen!” He did not want to be disturbed during his own humming, because that was composing! And when he had finished his meal before we did, he could always get up, and go to his studio, to write at once on the piano, the music that he had in his head. In that room he also had a high wooden column, completely filled with pipe tobacco. So he could always stop his pipe, and again, pipe smoking, sitting at the piano. When I, as a little 5-year-old girl, had to go to bed in the evening, I always gave my grandfather a night kiss on the top of his bald head. That was an odd feeling: I can still sense it now (after 80 years!): distant, and yet very close! I also often heard my grandparents play on two pianos, including that delicious Scherzo in B-minor opus 33, composed by my grandfather. My grandmother was also an excellent pianist. She gave me piano lessons every morning when I stayed there. And she also played me, from a piano extract, the whole “Zauberflöte” of Mozart, so that I would get to know it! My grandfather was at work then. It was whispered that my grandfather, when his children were still in the cradle, looked at their small hands, whether they were suitable for a certain instrument: piano, violin or cello. His children had to have music lessons from the very beginning. He apparently took that for granted. And so, as a grandchild, I was found to be suitable for the piano, and in the morning, when I was staying there, I had to sit at the piano! Only in the afternoon I was allowed to play in the garden! If there were music guests, but also with their own sons, a lot of chamber music was made, in the music room. I heard that from afar, when I was in the garden. That was a wonderful, and very special experience! For my grandfather it meant a lot to him that he witnessed that my sister Marie Louise was born, in February 1931. We were all so happy and grateful with her arrival in our family, and my grandparents in particular! There is another picture of us all in the garden of “Gaudeamus”, where my grandfather has my sister on his arm, and clearly enjoys it! In the last years before his death (in 1932) his health was deteriorating. He had to be operated. That was a disaster for my grandmother. I remember going to see him, with my grandmother and parents, in the hospital in Utrecht, after the operation. But I felt shocked by the way he looked. A very thin, pale man lay in the hospital bed. That really appealed to me. But how glad he was that I came to see him! And this contradiction, that body, thin and old, and that joy, as he always used to be, I will never forget! Then I realize that the true nature of my grandfather, that happy optimism, that warmth, which he knew to convey to his fellowmen, even through death, will always remain in our hearts!

Memories of Gaudeamus, from the moment the first stone was layed

A major change in our existence in Bilthoven arose when it was decided that my grandparents, after the retirement of our grandfather as director of the conservatory, would live in Bilthoven and that uncle Frants, who had completed his education at the Quellinus school in Amsterdam to build the house for them. The place was selected as the end of the Gerard Doulaan, on a corner, a large heath in front and further around pine and deciduous forest. A wonderful place. Some trouble appeared when a brother of grandmother Abrahamine (aka ‘bestemama’), who was Rosicrucian, came to see the place one day and found that there were earth rays under the place where it was to be built. Still, I saw the photograph these days, the first stone was laid in September 1924: bestemama with a huge velvet hat on, crouched with our children in front (it was her house), a canopy of fir branches, with the architect above, modestly drawn, the contractor with his men behind it and the rest of the family too. Grandson Frithjof was allowed to lay the foundation stone of this lovely house, which, typically for my life-loving grandfather, was baptized ‘Gaudeamus’ and is still known as such. It is well known in music circles that, after the death of my grandparents, Mr. Maas founded a music center for modern musicians and that, and still in the same music room, many activities are being held there. When the time had finally arrived and all the beautiful furniture had found it’s place, it had become a lovely and cozy home. When you rang the bell, you were welcomed by housekeeper Arie in a pink and white striped jacket, and through the vestibule you came into an angular hall, with bookcases on all sides, at the end a round staircase to the music room. It was built in a round shape and because the roof next to it goes up steeply, everyone thought that the house had to represent an open wing, which was not the intention at all. Two grand pianos were situated facing the street corner, and in this way, my grandparents were able to present the large symphony and opera works with four hands during music analysis lessons, which were soon given to enthusiasts. These were wonderful evenings, I was a loyal guest and I learned and enjoyed a lot. My grandfather in his element, highlighting all the details of a work while singing and playing.

The music hall of Villa Gaudeamus

I want to share another memory about the house: from the music room somewhere a little staircase went down and there was the cozy dining room with next to it a little box where Bestemama always washed the tea. From this room you came to the terrace, where in the summer tea parties took place. Upstairs were the rooms, for each son one, and a large guest room, except the bedroom of my grandparents, connected to (I found that impressive) a dressing room. Above it are the apartments of Arie and his wife Coba, who did the housekeeping (and eventually their daughter joined). A large forest garden around the house and in the back the studio of uncle Frants, who lodged at home for a long time. He developed his career as a young architect from there. After all, he was only nineteen years old when he built Gaudeamus. This house brought him some fame, because it was “different than usual”. The guest room was used very busy, from everywhere in the world there were guests, so the transition from Amsterdam was easy. In the coming years ‘Bestepapa’ also had a lot of time to compose. He did that in his own room, immediately to the left when you entered the hall. Particularly there was the very deeply built tobacco box, he was a fervent pipe smoker, you rarely saw him without. There was the grand piano he received from Grieg after a stay in Amsterdam, where they alternately played as soloists or conductor with the Concertgebouw Orchestra.

This text is taken from the autobiography ‘The Book of the Past, memories of Agnes Thiadens-Röntgen’, edited and published on the occasion of her 95th birthday by her son Reinier Thiadens in Saint Marcellin, April 2006.