From 1892 onwards Julius Röntgen spent practically every summer holiday with his family at manor house Fuglsang in Denmark. Every summer a great many friends and family of the residents, Viggo and Bodil de Neergaard, would come together, among whom many musicians from the Scandinavian countries. Bodil de Neergaard was a daughter of the Danish composer Emil Hartmann and herself an excellent singer.

Fuglsang has a beautiful concert hall and tradition would have it that during the summer months music would be played here (nowadays concerts still take place there). Carl Nielsen belonged to the regular guests and a special friendship grew between him and Julius Röntgen. Nielsen dedicated his Helios Overture to Röntgen and he revenged himself by then dedicating his Piano trio in C minor op. 50, which was first performed at Fuglsang in the summer of 1904, to Nielsen. Röntgen was a keen advocate of Nielsen and introduced his music to Holland. In Danish musical life Nielsen was a unique personality. Being the son of a farmer he felt tremendously drawn to country life. At Fuglsang he enjoyed lying in a meadow, using a grazing cow as a pillow and to be inspired by the murmuring sounds of its intestines. 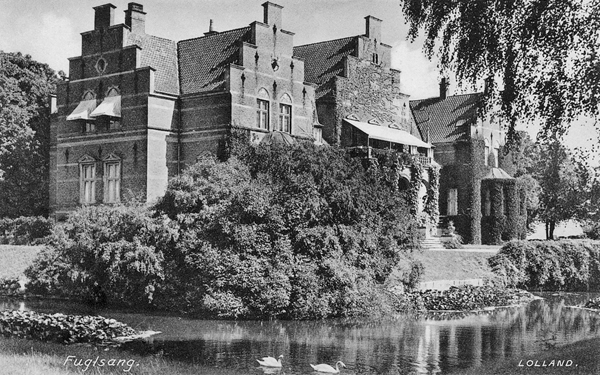 Fuglsang, the wonderful manor, with the beautiful park

Röntgens eldest son, Julius jr. , ‘Lula’ to his family, describes life at Fuglsang as follows in his memoirs:

‘Life at Fuglsang was an ideal holiday for young and old. The marvellous manor with its beautiful park, the hothouses, fruit trees and berry bushes offer enjoyment for everyone. Whenever one wandered through the park and through the meadow, one would reach the water between Laaland and Falster. That is where the bath house and the sailing boats were. We would undertake sailing trips daily to the Freiløfskov, a piece of nature in which one could imagine oneself back in the Stone Age. Often we would land on Keilsø, where we enjoyed the free ‘Zulu way of life’ and swam. At six o’clock back for dinner and the start of the concert was at eight sharp. What we played during those years encompasses pretty much the entire chamber music literature. As we grew up and developed as musicians we took part more actively. Playing music in that huge hall with two grand pianos was ideal. Bodil de Neergaard would sing every evening, accompanied by my father at the keyboard. Every morning from eleven to twelve we went over the programme. After that a most animating and delicious lunch after which those who wanted to went sailing or swimming.’

Anne Marie Telmanyi, daughter of Carl Nielsen and wife of the Hungarian violin virtuoso Telmanyi, gives a good impression of one of the musical soirées at Fuglsang:

‘Then we finally went into the music hall, curious about things about to happen. And a lot of things did happen. Julius Röntgen and his sons fetched their instruments and Mien Röntgen, his wife, sat at the piano..With her supple arm movements and her delicate hands she followed the instruments, but how can I describe the music? I think it was Schumann they were playing. They were all laughing at each other and by means of mutual knowing glances they expressed themselves. Musicians with the most sensitive feeling in their fingertips! Truly, that was music, that was life. At the end, there was applause. People wandered through the hall. Father and Röntgen, acting like tough guys, told jokes to each other but all appropriate to what had just happened musically. Then suddenly it became quiet. The double door was opened and two large tables with white cloth containing shiny silver jugs and a beautiful still life of fruit were pushed inside. The tea machines whirred, bottles of beer were opened and conversation started anew. That was the first evening at Fuglsang, and many, many more would follow.’