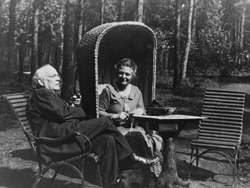 Abrahamine and Julius in the garden

Abrahamine was born as the eldest daughter in Jan des Amorie van der Hoeven’s second marriage. She was named after both her maternal grandmother, Abrahamine Hubrecht-Steenlack, and her paternal grandfather prof. Dr. Abraham des Amorie van der Hoeven, a well-know and highly esteemed Remonstrant clergyman and professor. Her father, married once before and already the father of six children, was the consul in Macao and a representative for the Nederlandsche Handelsmaatschappij (Dutch Trading Company).

Mien, as people called her, grew up under an undoubtedly large range of influences provided by her wealthy ancestors who were from Rotterdam originally and a family of clergymen, poets and politicians. She was orphaned at 13 and after having completed her years at boarding school in Brussels she lived with an uncle, Mr. P.F. Hubrecht, a politician in The Hague. She developed into a high-spirited young lady with a strong personality, spoke French, German and English fluently and would later master the Danish and Norwegian languages very reasonably too. She was a fundamentalist and, unlike her religiously oriented family, distanced herself from the church. She appeared to be very musical and have a talent for the piano, was taught at the Conservatory and attended many concerts; thus she often heard Julius Röntgen, playing the piano or others instruments, accompanying the singer Johannes Messchaert.

In 1892 she decided to take lessons from him and therefore regularly visited the house in the Van Baerlestraat no. 13. She witnessed the sad times during Amanda’s illness, Julius’ first wife, who died on 15 June 1894. 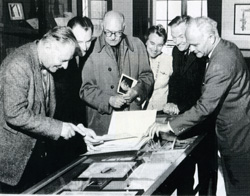 The four sons of Julius and Abrahamine, Bergen 1963

In 1896 Mien stayed in Lehmannsgarten, the residency of many artists in Leipzig and took part intensively in the musical activities in the Röntgen-Klengel household.
The engagement followed on 27 April 1897, in the turbulent time during which Julius was in deep mourning after the death of Johannes Brahms, but also described in letters to Grieg and Messchaert how very happy he was because of his Mien.

On 8 July 1897 Abrahamine married the then 42 year old Julius, ‘music managing director’ as it said in the records of the Register Office in Ede. They went on honeymoon to Norway where they visited Grieg. Julius and Mien had a happy marriage, which lasted 35 years. Mien was a good second mother to Julius and Engelbert, though, despite her firm character, she could be over-anxious as far as her children were concerned. Together with Julius she had four sons and a daughter, Amanda, who sadly only reached the age of four.

Mien was the centre of the busy household in the Van Eeghenstraat and later – after Julius retired in 1924 – in Villa Gaudeamus in Bilthoven too. Year after year the house was radiating with visits by many musicians from all over the world. She often sat at the piano within the family circle, she was a gifted teacher and taught music analysis lessons together with her husband. After Julius’s death in 1932, ‘Gaudeamus’ remained the centre of numerous musical events. Furthermore, directly after her husband’s death she worked with great dedication on compiling the book Brieven van Julius Röntgen (Letters from Julius Röntgen) which was published in 1934. She died in August 1940, shortly after the beginning of the Second World War.