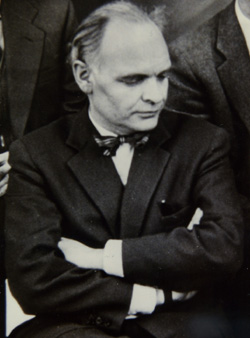 Frants Edvard was born on 28 April 1904 in Amsterdam, several weeks after his elder sister Amanda died at the age of four due to acute pneumonia. He was the third son of Julius Röntgen and his second wife Abrahamine des Amorie van der Hoeven. Two years before his brother had been given the names Edvard Frants at birth, named after Edvard Grieg and Frants Beyer, (Norwegian lawyer and musician). Grieg had been most surprised: ‘How could such a musical family bear such a unmusical and arhythmic sound!’; but now, with the names in reverse order, Grieg was satisfied. From then on he called the two brothers Edvard and Frants ‘das doppelte Kontrapunkt’.

From an early age Frants had shown more interest in drawing and clay modelling than musicianship and he therefore was to be the only son of Julius who would not become a professional musician. Even so he was a true Röntgen, a family which beside bringing forth musicians, also produced craftsmen, furniture makers, inventors and designers. Whilst sketching he was a critical listener at the chamber music concerts at home or during the summers at Fuglsang in Denmark; when he did start playing music later on he appeared to be a talented flautist.

After seven years of primary school Röntgen was taught at home. From 1918 until 1923 he went to the ‘Quellinus’ School for the Industrial Arts in Amsterdam, focusing on sculpting and furniture making and, in his last year, on architecture. There he made the first architectural drawings of the country house for his parents, Villa Gaudeamus in Bilthoven, characterised by the style of the Amsterdam School, with Norwegian influences; the 14 metre high roof was supposed to have been inspired by the Dutch sand dunes. The first stone of what is also called his opus 1 was laid on 16 September 1924. The design drew a lot of attention and it was mentioned in national and international specialist journals. In the period 1925-1929 he built Kees Boekes’ school ‘de Werkplaats’ and his place of residence, both also in Bilthoven. During the next ten years he worked for various architects, he was in Switzerland for a while and owned his own agency, first in Bilthoven and later in Amsterdam.

On 25 June 1938 he married Johanna Schwartz, a Montessori teacher in Amsterdam, daughter of the classicist M.A. Schwartz, who was at that time headmaster of the gymnasium in Nijmegen. They moved to The Hague where Frants Röntgen was employed by the Ministry of Housing and Construction from 1 July 1937 onwards. During the remainder of his career until his retirement in 1969 (in 1955 he was appointed as head architect with the department New Housing Development) he designed public schools, post offices, telephone exchanges, radio stations and laboratories (Rijksuniversiteit Leiden (Leiden University) and Landbouwhogeschool Wageningen (University of Agriculture Wageningen). Stylistically his work could be placed within the range of characteristics of the Amsterdam School en the Nieuwe Zakelijkheid (New Objectivity or New Pragmatism) to finally end up with even more austere and sober lines. His designs were often of interest, especially because of the use of the visual arts. Two of his buildings have been appointed as National Heritage since: the former Building of Land Surveying, on the Wageningse Berg (1953) and Villa Gaudeamus in Bilthoven (1925).

From 1955 until 1971 he was the architectural editor for the ‘Polytechnisch Tijdschrift’ (‘Polytechnic Magazine’) and wrote many critical articles and book reviews. Of great value are the countless sketchbooks and notebooks which he left behind. At concerts, in the train, a restaurant or wherever, he portrayed musicians, friends and family members. In accurate lines a profile or a pose was typified. Not forgetting the many townscapes, landscapes, churches and other buildings he put on paper during his travels. He died in Zoeterwoude on 7 January 1980, whilst engrossed in reading the newspaper.