Joachim grew up in the large parental house on the Van Eeghenstraat, where he was given his first inspirational music lessons from his mother and later acquired a solid technical foundation with violinist Felice Togni. (violinist of the Concertgebouw Orchestra).

Chamber music enjoyed first place in the Röntgen household, in family circles as well as with all the prominent international musicians who regularly came to stay, such as Pablo Casals, Donald Tovey, the German violinist Adolf Busch or the Australische pianist Percy Grainger. So Joachim joined in the house concerts from the age of 12, often performing the compositions by his father which had only recently been finished.

An important and most agreeable part in Joachim’s musical upbringing took place during the summer months on the island Lolland, in Denmark. There, on the wonderful country estate ‘Fuglsang’ belonging to friends of the family, the Neergaards, The Röntgens celebrated their holiday year after year. Tradition dictated there were many musicians among the guests and concerts, in which Joachim and his brothers also participated from a very early age, were given on a daily basis. 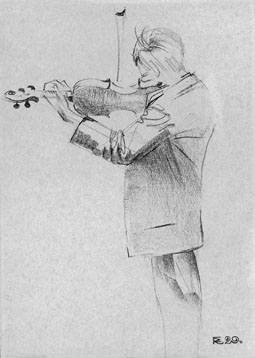 In 1924 he studied at the Conservatory in Cologne with Eldering, who used to work in Amsterdam and was a very good friend of Joachim’s father, Julius Röntgen. With his predilection for chamber music he managed to become part of numerous ensembles and undertook many concert tours through Germany.

On 1 September 1928 he was appointed as orchestra leader with the ‘Musikkollegium’, the Symphony Orchestra of Winterthur conducted by Hermann Scherchen, whose personality influenced Joachim’s own development a great deal. He also became a teacher at the music school there and first violinist of the Winterthur String Quartet. This marked the beginning of a very busy time with many performances in Switzerland and abroad. During this period he also collaborated regularly with the Romanian pianist Clara Haskil, to whom he would remain close for the rest of his life.

During the years 1929 until 1934 he followed lessons in Baden-Baden with the inspiring Hungarian violinist Carl Flesch, an excellent teacher who most likely stimulated the pedagogic gift of which Joachim showed promise in his future career. 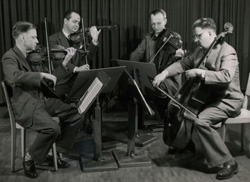 In 1930 he married Annemarie Tütsch, a marriage which lasted for almost 60 years. In 1939 he decided to accept a teaching post at the Royal Conservatory in The Hague, where he committed himself to teaching with great enthusiasm for many years. Despite the turbulent war years and the restrictions afflicted upon him, Joachim continued his activities as a musician and a teacher. He put together a piano trio with his brothers Johannes (piano) and Edvard (cello), the ‘Röntgen Trio’ and in 1941 founded the ‘Röntgen String Quartet’ with Piet Nijland (second violin), Wim de Zoete (viola) and Cornelis Preuyt (cello). Many performances followed, in Holland but also international concert tours to France, Italy, Switzerland. In the months February/March 1947 the quartet toured the Dutch East Indies, in April/May 1949 the Antilles and Surinam and during the fifties England more than once. After the hectic existence of public performances with the quartet had slowly but surely come to an end, he remained active for quite some time as leader of the Rotterdams Kamerorkest (Rotterdam Chamber Orchestra) and the Haags Museum Kamer Orkest (The Hague Museum Chamber Orchestra). He continued to devote himself to music, inspired youngsters and let himself be surrounded to the very last by people with whom he could play music with together, even at the Rosa Spier House in Laren where he moved in 1985 with his wife Annemarie and where he passed away on 6 December 1989. 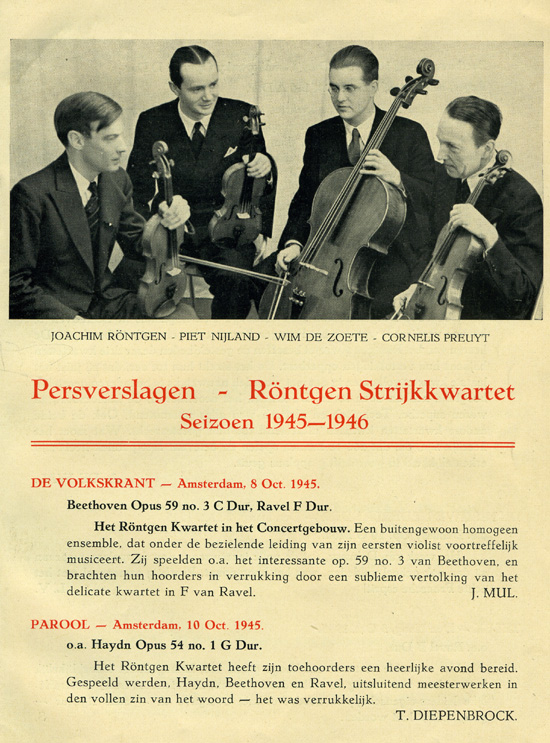