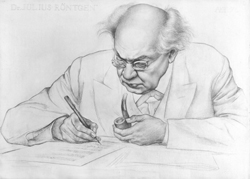 “In the time someone else would need to put paper and pencil ready and write down keys and key signature he will have, in a manner of speaking, completed the exposition of a fugue”. Thus Sem Dresden typified Julius Röntgen’s way of composing in Het Muziekleven in Nederland sinds 1880 (1923) (Musical Life in the Netherlands Since 1880). And indeed: Röntgen was an extremely prolific composer. Composing must have been a primary vital necessity for him. No opportunity went by without him putting together a new composition, which would subsequently, the ink still wet, be baptised by whichever musical friends and family would be present at that time.

Countless compositions were written by commission or dedicated to well-known contemporary musicians with whom he often maintained warm friendships. Because composing came so easily to him, he might not always have made the most of his composing talent. His strength is primarily in his chamber music and vocal works. When delving into his work one will encounter various compositions on a high level testifying to a very individual, recognisable style.

Most manuscripts by Julius Röntgen are kept in the Röntgen archive of the Nederlands Muziek Instituut (NMI) in The Hague. Besides in the NMI, printed works are also to be found in the public libraries in Amsterdam and The Hague. Opinions differ as to how many compositions of Julius Röntgen there actually are. It is difficult to obtain an accurate picture of his complete oeuvre, because a lot of works occur in different versions, come back later in another context or have been re-bundled with other kindred compositions (such as folksong arrangements, song collections, choir works, albums, etc.). Apart from all the arrangements and a few untraceable or lost works the number of original compositions by Röntgen can with some certainty be determined at around 610. A hundred of these works were printed with opus number, mainly by Breitkopf und Härtel and Alsbach, whereas about 20 works were printed without. 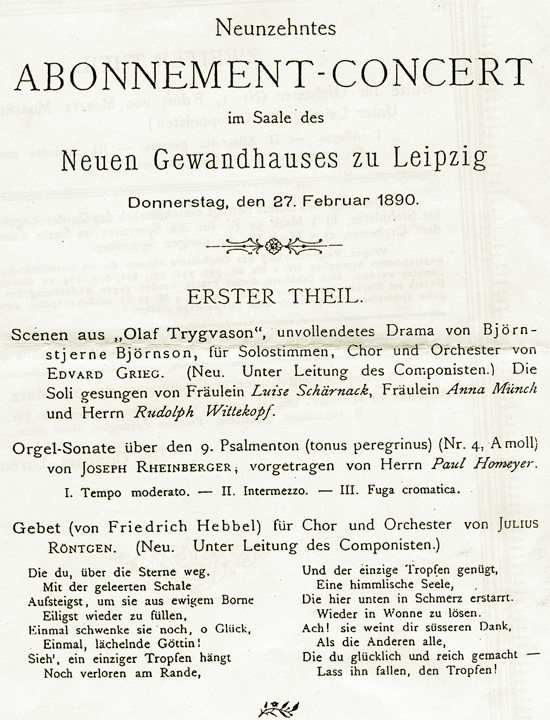